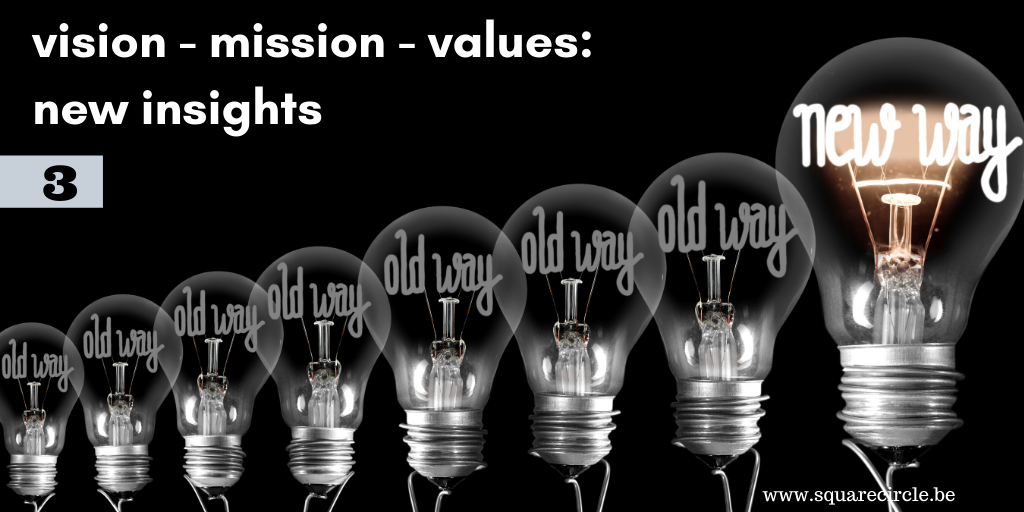 Does your business have a personality?

In two previous articles (Vision, mission, values), (A vision, a vision, my kingdom for a vision) we showed you how the ‘raison d’être’ (mission) and vision of a business are interconnected. Together, they can truly transform a business and align it with the future needs of the market. As long as attention is also paid to the values that will create a personality that will allow the business to consistently stand out from the competition.

A mission, a strong vision and… too many values?

Shared values are a key element in building a personality through the mission and vision of the business.
Values should be worn like a suit, not kept in a suitcase that you only open when you need it. You embrace values because they are personally meaningful and because they add something to the way you work as a team.

The best method for developing the values that will bring your business to the forefront of its industry is to once again trust the intelligence and intuition of your employees.

Starting from the values that everyone finds essential in their own lives, our methodology leads to the formulation of fundamental values that help to create a solid foundation for individual and collective behaviour.

It is interesting to note that, as expressed by the staff themselves, the values currently most cited in companies are respect (of the person, of opinions but also of commitments), transparency (honesty which leads to trust, open and frank communication) and team spirit (being involved in the work, having the right to participate, to be heard).

Three fundamental and deeply human elements that are not always explicitly reflected in the values promoted by many companies. You would almost think that those who formulate the values and those who bear them out do not even work in the same organisations!

Values… that are not actually values.

What does that all too familiar trio found in many companies of leadership, innovation, customer centricity actually mean?

Leadership.
That the CEO demonstrates leadership in his ability to mobilize and manage his organisation, no question there. This even extends to leadership positions. But a business is not just a team of leaders – it’s an artful blend of multiple skills that together form the perfect mix for success.

Innovation.
According to a survey done in the United States, 90% of the most talented and best paid employees in companies do not create new products or contribute to increasing profits. In Europe, only 17% of workers are involved in initiatives that create added value, and only a fraction of these are through innovation.

Talking about innovation as a value for all employees is, therefore, in a sense, wasted breath!

On the other hand, innovation can or should be part of the mission of many organisations, and not only in relation to technologies or products and services. Social innovation is just as impactful in a globalised world in order to ensure a company’s growth in a country or a continent.

Customer centricity.
Another value… which isn’t really one! This notion should be at the heart of your company’s mission, not presented as one of the values. And by the way, it’s always smart to describe what this notion means in concrete terms for employees. Chances are, everyone will give a different definition of it. So good luck putting it into practice!

A value that does not briefly describe the rights and obligations that it sets up between employees… is of little value.

An example. A company wants to promote a spirit of entrepreneurship internally and defines one of its values as ‘daring to do’. It hopes to encourage employees to take more initiatives, at all levels. But there’s a problem: taking more initiatives means that from time to time we are going to make mistakes.

During the discussion of the value, the right to make mistakes is mentioned. An initiative that was initially well thought out, but which did not lead to the expected result and which could have a negative impact, should not be held against the person or people who took it. Everyone has the right to make mistakes, but also the duty, when an error is made, to report it as soon as possible to their line manager and colleagues in order to ‘fix it’ if possible and to put everything in place to prevent it from happening again.

Without rights and obligations linked to the value of ‘daring to do’, nobody will ever take an initiative for fear that it will be held against him.

So do not hesitate to fundamentally review your values, and involve your employees in the process, in order to (re)formulate them and clarify these rights and obligations. You will see how energizing this is!

Also be aware that, generally, few people can formulate more than three or four values that can be concretely translated in terms of the behaviour they involve.

So, if you believe that 5, 6, 7 or 8 values are effective, perhaps you are overestimating the capabilities of humans in this area. Three or four is good, more than that is often useless… in terms of achieving your goals!

From values to behaviour: there’s only one effective recipe

The recipe, in a word: proximity management.

What do you think of our definition of the word ‘management’: ‘If you take care of your employees, they will take care of the machines, products, services and customers’?

The loss of economic value attributable to ‘faulty’ management has been calculated for more than 40 years (in more than 2000 companies and organisations) by our partner ISEOR (Institute of Socio-Economics of Companies and Organisations), one of the most important centres of management research in France. It is between 20,000 € and 60,000 € per person per year! We find the same figures in Belgium.

Faulty’ management is management that does not pay enough attention to human interactions within its team or vis-à-vis other teams. Management who have failed to grasp that economic performance is generated by men and women, not processes.

We wrote an article on this subject on the TFW virus which plagues many companies (see The TFW virus, the slow killer of companies?).

Values should be promoted ‘from the top down’. By applying them. By talking about them regularly at team meetings. By emphasising ‘good’ behaviours. By being very direct with those who do not apply the values. Sometimes even imposing sanctions for glaring shortcomings that have an impact on the team.

There is no other recipe for implementing a company’s values than proximity management. You have to think about them every day. Talk about them regularly. But isn’t this also true for the implementation of the vision? The strategy? Any other project for growth?

When the winds of change blow, some build shelters, others, wind turbines.

The function of the leader in the implementation of a truly ‘meaningful’ vision and values is crucial. It’s management’s responsibility too. But have management understood it?

A study carried out among 3000 managers in the United States and Europe confirms what we have long known, without always applying it in practice: the greatest potential for creativity and dynamism can be found at the level of middle management and among the employees immediately below them. This is where most of the added value is realised. And this is where you can tap into the greatest energy to implement the mission, the vision and the values.

The companies that stand out have dared to question hierarchical models and involve their employees as essential drivers of lasting change. They have become more real, more authentic and therefore able, as a result, to evolve and adapt much better and faster than all the others.They have developed the right reflexes, the antibodies to free-floating cynicism. They have convinced the majority of their staff that when the winds of change blow, it is better to build wind turbines than shelters.

The men and women who make up these companies speak a true language. They speak truthfully to each other, but with respect. They recognize mistakes and missteps and learn from them. They take initiatives even if it means falling flat from time to time.

In short, they get involved in the work, they do, knowing that if the team wins, everyone also wins individually. And that has an impact on customers and those around the organisation.

It’s the personality that sets a business apart. It comes from having a clear mission, an ambitious vision, shared values.

And this is something that is increasingly well understood by consumers and customers, as well as employees and investors!